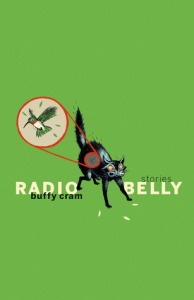 “…giving you the unexpected is what this promising young writer is best at…a whip-smart storyteller.”
—Globe & Mail

“…a terrific melange of overt weirdness and exquisite subtlety.”
—San Francisco Book Review

“…an entertaining read…Cram’s writing pulled me from story to story with its promise of wit and a new lens through which to see the world. It is not every writer who can successfully combine stories about Dead Heads, dystopian futures and moustache conspiracy theories, and that Buffy Cram not only did so, but did so in her first collection, is an exciting indication of what she might have in store for us in the future.”
—National Post

“Buffy Cram‘s debut short story collection is full of the stuff publishers salivate over. Oddball characters — a between-careers museum writer; a girl who believes her belly picks up radio — in absurd situations — on a giant island of plastic after the Armageddon; facing a growing hoard of middle-class homeless. Cram’s stories, like her characters and situations, are slightly unhinged…leaving you hungry for more.”
—Telegraph-Journal